The right to vote lies at the heart of American democracy and any nation where public officials are elected by citizens and every vote is equally counted. But trust in U.S. institutions and voter participation have decreased in recent years, as Americans lose confidence in politicians, the Supreme Court, and the media. Repeated allegations of voter fraud in the wake of the 2020 elections have created new barriers to voting for some Americans as the 2022 midterms near.

Voting rights also became a newly emphasized area of partisan focus after the 2020 election, when more Americans voted by mail and in advance, due in part to the COVID-19 pandemic. Since then, states have adopted or considered laws overhauling election systems. People in marginalized communities also are more likely to face barriers to voting access, especially in recent years. According to the ACLU, “Over the last decade, instead of protecting the Voting Rights Act (VRA) and expanding access to the ballot box, the Supreme Court and courts across the country have dismantled and gutted crucial parts of the VRA.”

In the face of these barriers and obstacles, business leaders are increasingly stepping up and speaking out for democracy while encouraging more eligible voters to show up at the polls and make their voices heard. This includes the Certified B Corporation community, which has a goal of building a more inclusive and resilient economy with practices and policies that involve and amplify the voices of those who have been overlooked or excluded.

To help B Corps drive social and political change on voter access and participation, B Lab U.S. & Canada has launched a “We The People Means All The People” campaign that includes resources, events, and other assets. This includes an Oct. 3 webinar in partnership with the ACLU, National Urban League, Southern Poverty Law Center, Amalgamated Bank, and the Leadership Conference on Civil and Human Rights. Watch for more coverage on voting rights and B Corps in the coming weeks as we build up to the 2022 midterm elections. 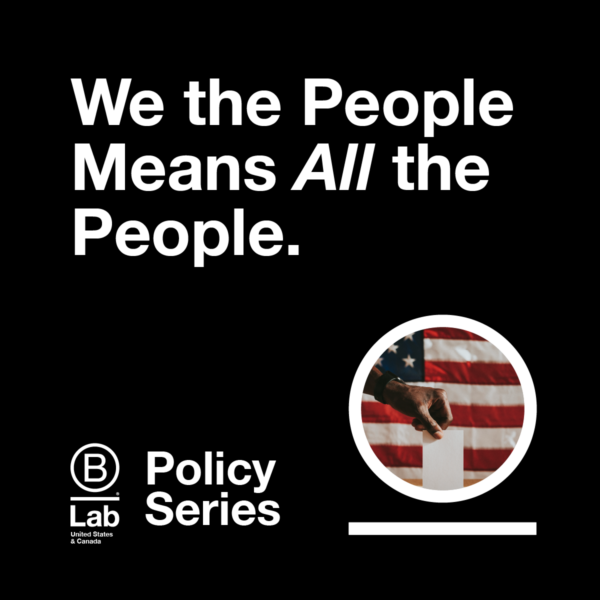 A Voting Rights Webinar for B Corps

How Companies Can Support Voting Rights and Voter Access

B Corps and other companies can support voter access in several ways, including with internal company policy, external communications, and advocacy. B Corps are already taking the lead by engaging with their customers, employees, and communities on this important issue.

To help B Corps build on these efforts, B Lab U.S. & Canada created an online resource page with information to share with employees and customers so they can get more familiar with their voting rights. Here are a few highlights:

How Businesses Can Support Voting Rights